After today’s race at Broxtowe, promoted by Beeston CC, I asked several riders to describe the race in one word… ‘muddy’ ‘epic’ ‘memorable’ ‘awful’ ‘awesome’ were some of the responses.  It was by far the muddiest of the year (so far), bringing challenge and a lot of spills.

In the U14/16 races U16 Ben Chilton (Derby Mercury) continued his impressive form, after winning the U15 trophy at the National Champs last week, to bring home a comfortable win over team mates Jack Hussleby and Flynn Gregory.  The U16 girls again saw Ellie Dilks (Cycle Derby) get the better of Lotta Mansfield (MI Racing Academy), getting away after Mansfield got stalled on the ditch by a slipping rider in front, and never getting back to Dilks.  Third was Lucy Buckley (Cycle Derby).

The start line of the Vets race was an interesting affair as there were rumours of Lee Shunburne entering the senior race too, and also a realisation that some people who chose not to race meant that others had secured league placings.  Shunburne led from the gun with Nathan Miller (Derby Mercury) and Neil Halliday (RAM) finishing second and third.  Shunburne’s biggest challenge came from V50 rider Pete Middleton who ploughed through the field (literally and figuratively) and finish second over the line despite the delayed V50 start.  Many fell foul to mechanicals or crashes and the fortunate (or better prepared) who kept things moving were rewarded.  Kirby Bennett (Jewson MI) and Mike Leanney (B&DCC) finished 2nd and 3rd V50.

In the final race of the day we welcomed NZ champion Kim Hurst on her way to the World Championships in two weeks time.  On the start line she remarked how she had never raced in such muddy conditions – good practice for Valkenburg!  Despite being pushed hard by World masters champion Kate Eedy (Empella), Hurst took the lead on the 3rd lap to take the win.  Eedy finished 30s behind and first VetF; 3rd over the line was Xan Crees (Empella) who finished first JuniorF despite falling foul of mechanical issues.  First U23 was Tiffany Fletcher (Empella).

In the men’s race, Lee Shunburne (Fossa) took to the start line just 30 minutes after winning the Vets’ race.  Despite starting fast and taking the lead, he said that he went ‘pop’ big time with two laps to go dropping lap times by almost two minutes, and falling back to 4th.  The race battle shifted to David Earth (Steve Poole Plant Hire) who finished almost two minutes ahead of second place league regular Kieren Brown (Argi8point8, U23) and third place Jonathan Brain.  First Junior was Matlock’s Alex Reynard, chalking up his first win and the fastest final lap of anyone on course.

It was an epic race.  Thanks to Beeston CC for organising…. have you managed to clean all the mud up yet? 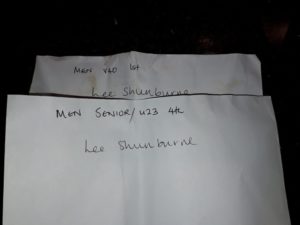