The second round of Markeaton park is notoriously one of the slippiest and trickiest of them all due to the soft ground and bad weather. However, this years would be different with a beaming sunshine to welcome people into the park. After a few riders had been around the course it quickly got quite sticky and still proved to be a challenge. Derby Mercury RC put on a well-executed event with a great course!

The Youth races got underway and after a week off the Notts and Derby League last week, Alec Gregory from Pedal Power Loughborough broke away from Derby Mercury’s Ben Chilton and Emile Alexander from Litchfield City CC to take the win in the U16 men’s race. The U14 men had the familiar face of Pines Cycles Chris Hilbert who rode off the front to storm to victory whilst overtaking the majority of the U16 men’s race. Second place went to Fred Shenton-Mcqueen from Beeston RC and thirst to William Ryan of Solihull CC. In the U16 women’s race there was only three seconds separating the top two girls. Lotta Mansfield from the MI Racing Academy would eventually have to settle for second behind Ellie Dilks (Cycle Derby CC). Alice Crane (Derby Mercury RC) completed the podium positions. Harriet Limb (Matlock CC) absolutely smashed the U14 women’s race putting over a minute into her nearest competitor Evie Steed (Bolsover & District CC).

Next up were the Veterans, this race of certainly one of the highlights of the day with the top three riders breaking away before the end of the first lap. Jim Bryan and Dan Alexander of Zepnat Cycles broke away with fan favourite Lee Shunburne (Fossa Racing) and got a clear gap over anyone else. However, Jim proved himself to be the strongest in the select group up front and go on to take the win with Lee coming second and Dan third. Closely followed behing the V40 race was the V50’s. Pete Middleton of Zepnat Cycles rode away from the chasers to take another win. A great day for Zepnat here at Markeaton. In second Nigel Gregory (Pedal Power) rode solo but passing most of the V40s in the process. The fight for third and fourth though was very exciting. Robin Delve (Mid Devon CC) and Peter Harris (Pearce Cycles RT) would lock horns towards the end of the race. Robin Delve ended up winning the sprint finish by less than a second, but Pete still managed to finish 1st V60.

The uphill slog coupled with wet and slippy logs proved to be no challenge for today’s winner of the Senior Men’s race Chris Metcalfe from Fabric Cycling. In the opening laps he was joined by Keiren Brown (Argi 8point8 Winter Green) who won the U23 category today and come second overall in the mens race. Chris would ride Kieren off his wheel proving to be too strong for him. George Baker from University of Sheffield CC filled out the final podium position whilst also taking second in the U23 race.

The Junior Male’s race came next where Timothy Elsmore-Martin from Fossa racing held off some fierce competition from Nottingham Clarion CC’s James Swadling who came in second. The third place position went to Alex Raynard of Matlock CC.

The last to set off was the Ladies race which was as entertaining as ever. Maddie Smith of Bolsover & District lead from start to finish and managed to get a lap up on the rest of the field. Sarah Lomas from team LIV AWOL came across the line in a well fought battle for second. Team Empella Cyclo-Cross were once again well represented in the Ladies races. Tracey Fletcher took third place overall in the women’s race whilst Xan Crees got fourth place and a win in the Junior female’s race. 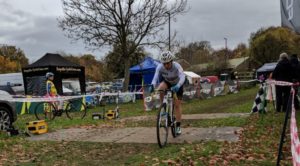 Great racing all round. We return after Christmas for the next round at Bakewell. Thank you to Derby Mercury CC for putting on a great race. See you soon.