VC Nottingham played host to the fifth round of the Forme Notts and Derby Cyclocross League at Bingham and with fears of incoming storm ‘Brian’ it was going to be an interesting day. As the day progressed the wind started to pick up across the flat fields separating the powerful from the not so powerful. However, it was the technical traverse across the steep banking that would cause a problem to the many. 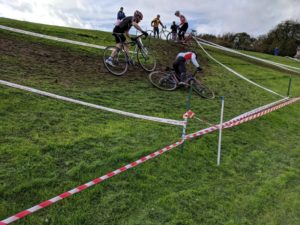 First off were the youth riders on a course that hadn’t been ridden in yet which was definitely an advantage in some areas. In the U16 race, Pedal Power Loughborough’s Alec Gregory would lead from the start to take the win but not without some pressure from Derby Mercury RC’s Ben Chilton who seemed to close the gap on the penultimate lap but could sustain Alec’s blistering pace. Jack Brough from The MI Racing Academy came in third to complete the podium spots.

The U14 race saw a the familiar face of Pines Cycles Chris Hilbert who once again lead from start to finish, as he has in the previous four round of the NDCXL this year. The real race was behind Chris as in the end there were only 10 seconds separating Alex Barker from Halesowen A & CC and Matlock CC’s Will Longden. Eventually Alex would pull away and keep his gap until the finish line.

Sarah Briggs of Matlock CC would take the race by the hoods and lead from the start continuously pushing throughout the race, despite puncturing close to the finish. She would eventually go on to take the  win in the U16 race closely followed by Lotta Mansfield of The MI Racing Academy, who needed to chase through the entire field after getting well and truly tangled in the tape on the first lap. VC Long Eaton’s Codie Strickland who would swoop in to take third.

In the Under 14 Girls race Leicester Forest CC’s Libby Bell would ride away and put nearly 2 minutes into her closest rival, Florence Lissaman from Newark Castle CC. Harriet Limb (Matlock CC) couldn’t hold on to Florence’s wheel and in the end took third place. 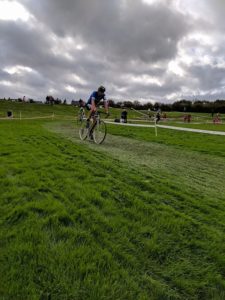 The Veterans race is usually the busiest field of the day and today was no different. Plenty of V40’s and V50 were brave enough to venture out into the stormy winds and tackle the Bingham bank. Nathan Miller of Derby Mercury CC certainly would get an easy win today as RAM CC’s Neil Halliday would set off like a bullet from a gun shooting into an early lead. Nathan would bring the lead in and get the overtake with three laps to go. Neil had to keep his guard up though as third place finisher James Thompson from Scott Racing was closing in quickly.

In the V50 race Pete Middleton from Zepnat would lead from the start and hold his position right until the end. The bright coloured helmets of the Zepnat team really are unmissable. Behing Pete was the race for second which was decided within the first three laps. Nigel Smith from Argi 8point8 Winter Green raced to second place ahead of Michael Leaney from Bolsover District CC.

As per usual the Seniors, Juniors and the Women were all racing in the final race of the day. The wind was really starting to pick up now. If the quad burn would get to the riders, the wind burn certainly would. With this also being the last race of the day, the course was churned up and slippery around some of the corners.

The senior men were off first and Cameron Orr was looking to continue his dominance in the U23 race as he did at Alfreton. He did have some competition this week from the Senior men’s race. Chris Metcalfe of Fabric Cycling opened up the start sprint at an incredible speed that nobody could hold onto, despite returning from Majorca at 3am on the morning of the race. Tom Dussek in the Junior race also gave his best to catch up finishing 8th overall in the race overtaking some of the seriously quick senior riders, after a ding-dong battle with team mate Elliot Bannister (Nottm Clarion). The continuous switchbacks up and down the banks would take their toll on a few riders, standing out with the mud marks down their legs and arms. Luckily though we had no major injuries.

Second and third in the senior men’s race was contested between David Earth of Steve Pool Plant Hire/Raleigh and Bruce Dalton of Team Kinesis showing some of the form that he has been searching for all season. The two were locked in action for a few laps until David Earth moved away and secured second place.

The women’s racing was as exciting as usual with some close racing between Jo Clay of the Torque Perfomance Team, Kate Eedy from Team Empella and Sarah Lomas from the LIV AWOL team. Kate Eedy would lead the race for the first few laps before Jo and Sarah would work together to try and close the gap. This wouldn’t be the case though and Kate would continue to power away from the other two leaving them to race for second. Jo would make a break on the last lap and secure second place over Sarah. All three of these women finished winners  in their respective categories.

Big thanks to VC Nottingham for the great event they have put on and we look forward to Holme Pierrepont on the 4th of November.