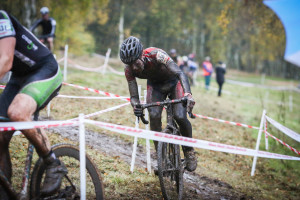 This weekend saw the SRAM NDCXL visit Holme Pierrepont in Nottingham, courtesy of organising club Nottingham Clarion. The earlier races in the day enjoyed a relatively dry course, but the promised rain eventually arrived in time for the Senior and Vets races, which rapidly changed the course character, and gave the pit crews their first real test of the season.

The Senior Men’s race saw George Thompson (Sleaford Wheelers) attack hard from the whistle, with only Jonathan Harper (Mansfield Road Club) able to stay on his wheel. The pair built up a significant gap on the rest of the field, and rode together until the fourth lap, when the pace began to prove too much for Harper. Thompson went on to take the win by 30 seconds with Pedal Power’s Paul Cox taking third place.

The Junior Men’s race saw some strong efforts, with all of the top three riding into the top ten of the main race itself. Calum Fernie (Nottingham Clarion) took the win, ahead of VC Lincoln’s James Armstrong and Kieren Brown (Bolsover & District CC)

The Veteran Men’s race saw a strong field take to the start line. In the V40s, Fossa Racing’s Matt Crouch led the racers into the first lap, but by the end of lap 1 Darren Atkins (Ride Coventry) and Team Jewson’s Carl Sturgeon had established themselves as the front two. Sturgeon worked hard throughout the race to reel Atkins in, but never got closer than ten seconds behind the leader and eventual winner. Behind them Crouch fought with Peak Road Club’s Dan Cook, with Cook eventually taking third.

Harvey Levan (Cadence Sport) led out the V50s, but by the end of the first lap Team Jewson’s Kirby Bennett had moved into the lead, one which he held onto to take the win. The battle for second and third lasted throughout the race to the end of the last lap, with Geoff Giddings (Team Jewson) and Leicestershire Road Club’s Nigel Gregory still trading places on the final sections. Giddings efforts were eventually rewarded with second place. Carl McDonagh took the V60 win for Zepnat

Xan Crees (Empella) rode to victory in the U16 Girls race, ahead of Leicestershire Road Club’s Jessica Cobbe and Bolsover’s Grace Barker.

Lichfield CC enjoyed more success with another Barnes, this time with Toby Barnes in the U16 Boys. Despite early challenges from Nottingham Clarion’s Tom Dussek, Barnes eventually rode to a comfortable victory a minute ahead at the finish. Despite chasing Dussek hard throughout the race, Pedalsport’s Jensen Young had to settle for third.

In the U12 Boys race, Christopher Hilbert (Pines Cycles – Felt – Enve) and Sam Gould (Zepnat) continued their season long battle for the top of the league, with Hilbert maintaining his record of maximum league points by taking the win. Nottingham Clarion’s Ben Kerry took third.

The U12 Girls race saw Jessica Tiffney enjoy another win, ahead of Bolsover’s Grace Fishleigh and Matlock’s Annabel Parker.